Many years ago, my wife and I attended a tourism conference focused on making this beautiful island of Anguilla even better. The one question that caught us all by surprise was: “What is the number one reason that people come to Anguilla?”

“The beaches,” one person shouted. “No, the beautiful weather,” said another. “Come on everyone, it’s the fresh and delicious seafood.”

Well, of course all of that is true but that’s not the NUMBER 1 reason.

The number 1 reason is…

the people! Yes, the Anguillian!

Anguillians know that sometimes it can be a visitor’s nightmare to try and understand “De Anguillian” in our freestyle way of communicating and our use of directions (East and West).

Have no fear, I’m here to make sure it’s only sweet dreams on this paradise island called Anguilla by teaching you some of our dialect.

Now, usually we tone it down a little and try to speak slower and as close to the Queen’s English language as we can, just for you. But if you’re to hear our unfiltered typical conversation, it’ll be a jaw-dropping experience probably leaving you with a face of confusion and your eyes wide open in surprise. Let’s listen to two Anguillians go at it.

2: Dah down Sandy Ground by Johnno’s

2: Aya! Well dem better come back north tonight cause I man will be down in the Mud waiting on dem man to play

This is what you have coming at you in a fast and speedy dialect. Now let’s decode this puzzle:

Good Morning (‘Mornin)/Afternoon = These are greetings that display manners. It’s the way we grew up, from generations passed on. We must always say good morning or good afternoon especially to elders or strangers – it shows respect.

Aya or Aya Lawd = An expression meaning “Wow” or “Oh, my God

Wer-dah-be = Simply put, it means “Where is that?”

Wer de lime be = This is a question asking where the entertainment is or an event. Normally it’s with music and people dancing… a place to enjoy yourself!

Aya looka wuk = An expression meaning “Oh, my goodness,” if something is unbelievable or if you are totally surprised.

The dialect of De Anguillian is in this text, but the true Anguillian is more than just words. You’ll see who we are through our eyes, bright smiles and that great Anguillian hug. You’ll feel a love that honours you; that inner love that only “De Anguillian” has to offer.

When you’re traveling around Anguilla in your Andy’s Auto Rentals vehicle (wink-wink), you may think you’ll have some problems getting from point A to point B. I will admit that the road signs are not many and small in print, but don’t worry about this.

De Anguillian can get you where you’re going in a very unique way. Explaining directions to you will include no street signs, numbers or addresses. It’s only landmarks, traffic lights, roundabouts or sometimes the names of elders in a particular village. Here’s a simple example:

Visitor: “Excuse me. Good afternoon. Can you please tell me where I can find the Best Buy?”

De Anguillian: “Sure. You’re the closest to Best Buy West and it’s only two turns here from the ferry terminal and about 15-18 minutes away.

De Anguillian: “Drive straight up north to the first traffic light and make a left. Then you gonna drive straight going west ‘til you come to a second street light. Continue driving straight. After that you’ll meet a gas station on your left and that’s when you’re getting warm.”

De Anguillian: “After the gas station, keep driving and the big huge building on the right is the Best Buy.”

Visitor: “Thank you so much, I really appreciate it.”

IMPORTANT WARNING: Please do not accept directions with live animals as landmarks, such as “make a right after the big cow tied to the big tamarind tree.” Those animals sometimes do move and relocate. Now what is all the North, South, East and West about?

North or South – Anguilla is 16 miles long and 3 miles wide so most directions will be only east and west instead of north and south. We do have villages in the north such as North Hill and in the south such as South Hill or Blowing Point.

If someone “went south” (like in the local dialect example), it’s probably to St. Martin/ St. Maarten, but it can geographically be any island or country to the south of Anguilla.

If you “go north” it’s in a northward direction usually from Anguilla to the United States or Canada.

East – The east of the island is where the sun rises. Villages such as Island Harbour and East End are located at the east part of the island.

West – The west of the island is where the sun sets, and it’s considered the end or the tail part of the island. Most of the hotels such as CuisinArt, Cap Juluca and Four Seasons are located in the west.

So you see, getting lost on this island is not an option and you might be the first to do so. Here’s a tip: just keep on driving and you’ll eventually end up where you want to be. If not, at least you’ll get to see a new beach, try another great restaurant or meet some more of “De Anguillian” wonderful people. This is the Andy way of getting it done! 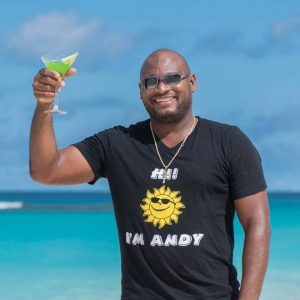 Andy Connor is the owner of Andy’s Auto Rentals – located in a cute gift shop at the Blowing Point Ferry Terminal that is worth a visit.

Andy’s offers great value (his rates start only $35/day) and top service. Treat yourself to one of his popular Beetle convertibles to explore Anguilla the next time you visit.

Andy Connor is the owner of Andy’s Auto Rentals – located in a cute gift shop at the Blowing Point Ferry Terminal that is worth a visit.

Andy’s offers great value (his rates start only $35/day) and top service. Treat yourself to one of his popular Beetle convertibles to explore Anguilla the next time you visit.

My summer memories in Anguilla are flooded with days that were filled with leaping off the wharf in Sandy Ground.

Born Anguillian, Amelia worked her way up from being the first-ever employee at the newly conceived Tourism Offices (in 1978) to ultimately becoming the Director of Tourism at the Anguilla Tourist Board. Anguillian by nurture, Mimi is a native (bilingual) French Canadian, who spent many years as the Executive Director of the Anguilla Hotel and Tourism Association. In their complimentary public and private sector roles they cemented an enduring friendship and professional relationship based on a love of their island home and mutual support of Anguilla’s innovative “High value/Low volume” tourism plan.

Kenroy knew from an early age that he wanted to get involved in hospitality, because he loved meeting and interacting with people.