About five years ago (around this same time) a tourist came up to me at the beach and asked why there were so many signs around the place with people’s faces on them. I replied that it was an election year and the signs she was seeing were advertisements for the various candidates running. The woman looked at me quizzically, turning her head to the side so that her wide-brimmed sunhat slanted at an unusual angle. The minute she opened her mouth again, I knew why I needed to one day write an article like this one.

The woman was surprised to discover that Anguilla had a government or even elections at all. That day, on the boardwalk of a popular beach bar, I gave a micro-lesson in Anguillian politics. It surprised me that someone would think we don’t function like a country, but my life as an educator has taught me to combat ignorance with information first. When True Anguilla reached out and asked me to do a piece for their readers on the Anguillian elections, I thought that it would be a great opportunity to offer a crash course on elections in my favourite format– a list.

10 things to know about how the Anguillian elections work:

1. We have elections every 5 years.
2. The island is divided into 7 districts.
3. Each district has representatives who can either run with a party or independently.
4. Voters can only cast district votes for the people running in their district. 5. This year, for the first time, there are 4 at-large seats available.
6. At-large candidates can either run with a party or independently.
7. Island wide, voters can vote for up to 4 at-large candidates.
8. In total, each Anguillian can choose 5 people on the ballot to become part of parliament—their district seat, and 4 at-large.
9. In order to gain power and control the executive, a group needs to win the majority (at least 6) seats.
10. The group with the lesser number of seats becomes known as “The Opposition”.

In addition to the introduction of at-large candidates, there is another noteworthy occurrence for elections this year—the phenomenal amount of youth involvement.

From the candidates under 35 to the teams behind party marketing, elections have shifted from the over-40 arena to an important part of the younger voting populace’s attention. I’ve lived permanently in Anguilla since 1998 and never before have I seen such an outpowering of youth support for the general elections.

The Anguilla National Youth Council has in the past been instrumental in organizing debates leading up to the election, but this year, they upped the ante.

Debates were held almost nightly and streamed live on Facebook reaching an audience larger than the traditional in-person supporters. Previously, radio played centerstage in elections, but this year the shift moved to social media with YouTube advertisements and Instagram accounts pushing various candidates.

A year of change and technology also means that the Anguillian elections will be digital for the first time.

Previously, voters visited polls, bubbled in their candidate with a pencil in a booth behind a curtain, and inked their finger on the way out to ensure that they couldn’t vote again. This year, voter identification cards were released and training has occurred to ensure that the new digital elections run smoothly.

Suffice it to say, the tiny island of Anguilla with around 14,000 people is abuzz with the voting date soon approaching. Although there are no tourists right now as a result of border closures following the COVID-19 pandemic, if there were, they would surely tilt their sunhats at the billboards decorating the usually commercial-free landscape. One election rule still stands, however—all political material must come down before election day on June 29, 2020. 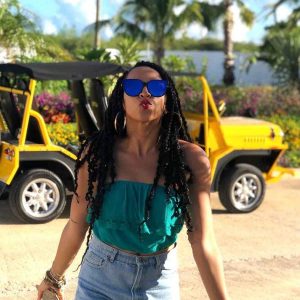 Read More
I Do / Island Intel

Samantha Boyce Kentish of KSharp Media and Storm Jordan Productions shares her tips on getting the perfect wedding makeup in Anguilla.

Looking for a book for the beach? Or one to take you back to the beach? True Anguilla has you covered ...