The following article was originally published in the third edition of TRUE Anguilla magazine in 2016.

Kenroy Herbert, is determined to make the most of the opportunities living and working in one of the world’s most luxurious tourism destinations affords. “We have the perfect canvas for tourism – beautiful beaches, proximity to the USA and friendly people.”

He knew from an early age that he wanted to get involved in hospitality, because he loved meeting and interacting with people – despite skepticism from friends and family who thought that he would have better job security working with the government.

Inspiring lessons delivered by newly qualified Teacher, Sharon E Richardson (now Director of Hospitality Studies at the island’s Community College), instilled an abiding enthusiasm for “the business,” and lit even more of a fire under him.

After school this “rebel with straight A’s” toed the path of least resistance though, and took a job at the Government Water Laboratory – where he won scholarships and undertook placements in islands like Trinidad and St. Lucia. But job security was not enough, and the quiet routine of the lab felt like “putting a wet blanket over a fire,” and he handed in his notice only to be called the same day and offered a job at the Rum Factory, home of Anguilla’s Pyrat Rum.

He landed a dream job – Quality Control Officer for the various rums and liqueurs that were blended and packaged at the Sandy Ground site, but sadly was still locked away in a lab. Until, one fortuitous day, Mr. and Mrs. Bill Cosby came to the tasting room in search of their favourite rum liqueur; and as the regular staff member was not there, Kenroy stepped in and gave the presentation. Afterwards, his boss – who had watched the interaction between Kenroy and the famous couple – was so impressed, promoted him to Production Manager.

Always looking to learn new things, a few years later Kenroy resigned and took a position at the then brand-new Greg Norman designed golf course as a caddy, because he loved to play golf and, most importantly, saw it as a great way to progress his career. Friends were puzzled over why he would leave a management position to “carry people’s bags,” but Kenroy knew he would cross paths with interesting and influential people associated with the development. He was right.

During his time there he met, caddied for and played golf with numerous investors and tourism professionals, including tourism pioneer Robin Ricketts who, alongside his wife Sue, was instrumental in opening Malliouhana and Cap Juluca Hotels. A few months later, Kenroy began working with the couple.

Fast forward to 2022 and Kenroy is as entrepreneurial as ever – he now owns two businesses – Leviticus Lifestyle and Olympus Cars and is the current Chairman of the Anguilla Tourist Board.

Kenroy’s entrepreneurial fire has been well and truly flamed, and alongside his demanding job he has also launched two local businesses, one detailing cars (recently sold) and one cleaning homes.

Breaking news for the 2016 season is that he is launching an exciting new tourism product, that encompasses not only Anguilla, but St. Barths and St. Martin. He and his wife Kirsten, who works in Anguilla’s financial services sector, hope to start a family soon. They are both active in the community, and Kenroy recently coordinated an island-wide cleanup campaign to great success.

So what’s next for this young Anguillian entrepreneur? His dream is to develop his own small, luxury, boutique hotel. Watch this space – because when Kenroy sets his mind to something, it usually happens!

WHAT TRENDS ARE YOU NOTICING AMONGST YOUR GUESTS?

“The wealthy are getting younger and don’t want to be spectators. They don’t just want to lie on the beach; they want access to more active stuff as well. I want to see us providing new and engaging things to do for that crowd.”

WHAT IS ONE OF THE MOST UNUSUAL REQUESTS YOU HAVE HAD?

“One Christmas, a family that stayed in one of our villas wanted to immerse themselves in our culture, and asked what we really eat for Xmas. So I told them; turkey and ham like you, but also goat meat… She’s like, “Ok, I want to try that, but I also want to see the goat being slaughtered.” She was a trouper! She came, she saw it and then their private chef cooked it for her. She loved the goat water so much she took it home on their private jet!”

WHAT DO YOU RECOMMEND PEOPLE “MUST DO” WHEN THEY VISIT?

“It depends who’s asking the questions! If they are younger I always say, “Anguilla is surrounded by water – definitely take a boat charter with Calypso or a tiger boat tour with Freedom Rentals to Little Bay and jump off the rock – a scary but amazing experience.” And if you want to try something local and you like barbeque, you’ve got to eat at either Ken’s in the Valley or by his brother ”Paper“ in East End on a Friday evening – which is a very good evening to experience our local culture.”

Want more Kenroy? Then watch him on TRUE Anguilla TV.

In the first episode of TRUE Anguilla TV we catch up with some of the special people we have interviewed over the years and find out what’s changed for them since we last spoke to them. So check out the show to hear the latest on Armel Harrigan, Omari Banks and the dynamic ladies from Blue Sea Anguilla, Mimi and Amelia. 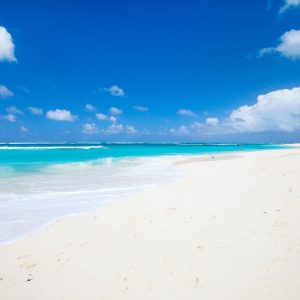 Back to All Articles

Gather your friends and family and ring in the New Year at Aurora Anguilla. We have three specially curated dining experiences to choose from followed by a concert you won't want to miss.

One night I came upon a Travel and Leisure with a cover that said, simply: ‘Most Beautiful Beaches in the World’. Anguilla was featured prominently and the lead picture was of Shoal Bay East – a long and nearly empty sweep of white sand with a few palm trees at the far end.

"Endless Turquoise will take you on holiday from real life as you voyage to Zephyr, a Caribbean idyll, replete with stunning beaches, luxurious hotels and comic cultural exchanges."